My sister lives in Greece and cooks mostly traditional Greek food; on a shoestring budget.  Both those things mean that she cooks good, homemade, traditional dishes, with seasonally available ingredients.  Her dishes are flavorful, delicious and pleasing to the eye as well as the pallet!

During my last visit in Greece, I shadowed her and took lots of pictures.  I would love for my dishes to look and taste the way hers do!  After I returned home to North Carolina, I figured I could share some of the knowledge I gained in her kitchen here.  I will post some of her recipes occasionally, and will try to extract more from her.

Please be advised that both she and I are home cooks – sometimes our recipes include “a little bit of flour”, a pinch of this or that”, a “dash of olive oil” or “some water”.  These are hard to quantify measurements that cannot be translated into Tablespoons, teaspoons, or cups…..

My sister Marina was given a bag full of grapevine leaves the other day, and so she and my mom set out to make stuffed grapevine leaves yesterday (this being a little in between activity among my sister getting two kids ready for school, nursing a third one who is sick, tending to us tourists who are visiting, picking up Uncle Paul from the airport, organizing dad’s 80th birthday party, grocery shopping – have I mentioned enough?)

Fresh grape vine leaves are something fabulous (packaged ones are not bad, but the fresh ones are fabulous). They have to be blanched and then “shocked” in cold water in order to stop the cooking process. 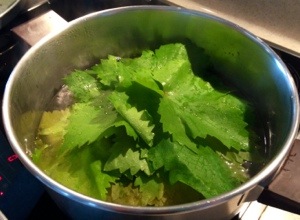 When taking them out of the water (right after shocking them), they have to be laid flat, one on top of the other – this prevents them from clumping and makes the rolling much easier later on. 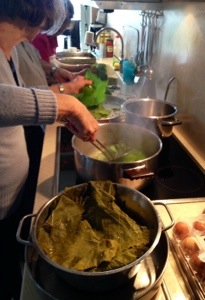 Now, one puts a tablespoon (or two) of olive oil in a sauce pan, adds chopped green onions and chopped dill & chopped mint. Of course one can used dried but the fresh herbs are much more potent and incorporate better.

Once the onions have softened, add (uncooked rice). Once the rice has been added, the mixture has to be stirred continuously, or the rice will stick, clump and the whole thing will become inedible.Once the rice has become translucent, and is glistening and covered in oil, you can remove the pot from the stove.

Then the rolling begins! Our mom had volunteered to “help” make Dolmades; she ended up spending the entire evening sitting at Marina’s counter rolling Dolmades and neatly stacking them in a pot. I don’t think any of the rest of us, rolled a single one! 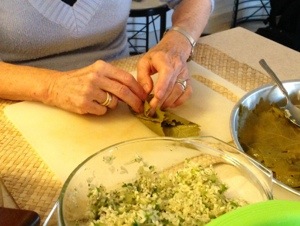 They are rolled just like a well made burrito: one lays out a grape vine leaf, sets approximately a teaspoon if rice mixture in the lower half of the leaf, folds the sides in and rolls it tight.

Mom and marina (my sister) were working away….After the Dolmades were rolled, they were stacked neatly in a pot lined with grapevine leaves. they have to be laid in the pot tightly together, so they don’t move around and unravel. 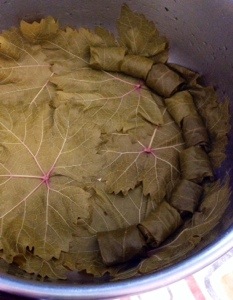 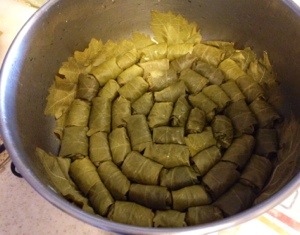 They are then covered with a plate (inside the pot, directly in top of the Dolmades). One adds water, just enough to barely cover the Dolmades, and a tbsp of olive oil. And here comes the important part: they have to cook an VERY low temperature for approx. an hour (all one is doing is cooking the rice). Nothing may bubble or boil.

When they are done, and cooled down just a little, they are little bites bursting with Mediterranean flavor, worth every bit the time and effort it took to prepare them!

This is a salad that is very popular in Greece. It is also quick, easy to make and very inexpensive. It lends itself very well as a pot luck dish and/or a vegetarian offering and can be transported easily to any function.

It is one of the dishes that we had at my sister’s house on occasion of my dad’s 80th birthday.

The recipe is below and can also be found on the “From My Sister’s Kitchen” page.

Peel the potatoes and cut them in pea sized cubes. Boil until done; avoid over cooking them. You want them to have a bit of “bite” to them. Drain and set aside.

Prepare peas and carrots, and green beans according to package directions. Drain and set aside.

Combine all ingredients into a large bowl.

In a smaller bowl combine the mayonnaise, Greek yogurt and vinegar – mix well and pour over the vegetables. 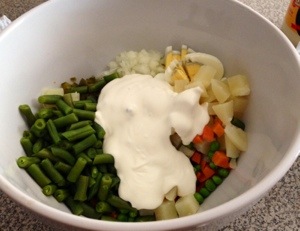 All this was easy, right? This next part is easy too, but important. GENTLY mix the ingredients until they are coated with the “dressing”. You have to be gentle as to not crush the vegetables and turn the whole thing into “mush”.

Cover the bowl with cellophane wrap and place in the refrigerator for a couple of hours. 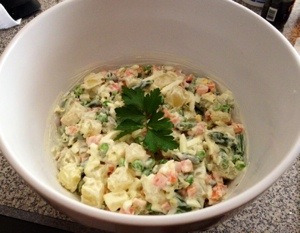